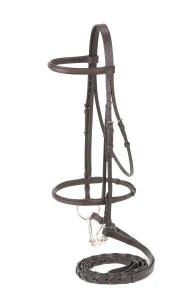 According to Wikipedia a bridle is a “piece of equipment used to direct a horse“. According to  the Oxford English Dictionary, the bridle includes both the headstall that holds a bit that goes in the mouth of a horse, and the reins that are attached to the bit.

Headgear without a bit that uses a noseband to control a horse is called a hackamore, or, in some areas, a bitless bridle. There are many different designs with many different name variations, but all use a noseband that is designed to exert pressure on sensitive areas of the animal’s face to provide direction and control.

The bridle is made up of a number of different parts including:

There are different styles of bridle available:

A hackamore works through pressure points on the face of the horse, usually with a nosepiece instead of a bit.  It is not the same thing as a halter, which is generally used for leading the horse, or tying it up.  Bitless bridles are similar to hakamores, but some designs use different pressure points for control.  Both these styles of bridle use a headstall with reins attached to some type of noseband or nosepiece.  Designs vary and can allow control and good communication with the horse.  In some cases they might be more comfortable for the horse, particularly a young animal or one with some form of mouth injury or sensitivity.

Bitless bridles are used in some American horse sports such as endurance riding and trail riding. A design called the mechanical hackamore is sometimes seen at rodeos. Most horse show events do not allow bitless bridles of any kind, however in show jumping equipment rules are more generous. A design that combines elements of the original (or bosal) hackamore is known as a ‘sidepull’, which acts mostly on the nose.  These are often popular with western riders and many trail riders.

Each bridle is fitted to an individual horse.  Poor fitting can result in the horse being uncomfortable and possibly in a lack of control, or unclear communication for the rider.

The length of each individual piece of the bridle needs to be adjusted to the size of the horse.  Many pieces are adjustable, using buckles, but this can be limited so many manufacturers offer 2-6 basic sizes for example cob, pony or draft.

The bit and browband are of fixed lengths and must be selected in the correct size for the horse.  A too-narrow bit is uncomfortable and cannot be widened.  One that is a little too wide can be narrowed to some degree using bit guards.  If the browband is too short it can rub on the ears.  The cheekpieces should be adjusted so that the bit does not pull the corners of the horse’s mouth or bang on the incisors, but also so that it hangs properly in the mouth.  The noseband should be snug enough to be effective but not so tight that it is uncomfortable.  The throatlash should be loose enough so that it does not interfere when the horse raises or lowers its head.  The general rule is that you should be able to fit 3-4 fingers between the throatlash and the cheek.

There are a large number of different bits.  They are divided into categories, depending on how they are designed to work:

There has been some controversy about which design is kinder to the horse: the bitless bridle, or one with a bit.  NaturalHorse.com advocate the use of a bitless bridle and insist that it does not mean that the rider has any less control.  They say that, “for those who believe in the comfort and physical/psychological health of their horse, a bitless bridle is a natural choice”.  On their website they say that:

The Bitless Bridle provides better steering than a bit or natural hackamore/rope halter, and more reliable brakes than a bit or sidepull.  Freedom from pain results in calmness and obedience.

While this may be true it is also the case that some riders, not realizing that a horse’s head overall is a very sensitive area, use a noseband-based style of headgear without the same caution they might use with a bit, thus defeating any benefit that an apparently milder form of gear would otherwise provide. While many bitless designs are marketed as humane, and some are indeed quite mild, other designs can be remarkably harsh in the hands of a poor rider, particularly if they are improperly adjusted or have metal parts, a thin design, or rough surfaces.  The horses face has a large number of nerves and it is important to be aware of this when choosing the bridle, ensuring that it is a good fit for the horse, and that it is appropriate for the work he will be expected to do.

In an article published in the Daily Mail in June 2014, Norman Lamb MP, the Liberal Democrat minister for care services, was reported to be backing a campaign to:

“save horses from pain by allowing top-level riders to compete using bridles without the traditional metal bit.”

He wanted a change to the rules for dressage competitions.  Currently the Federation Equestre Internationale (FEI) demands that Olympic dressage riders use bitted bridles.  This rule is enforced at a national level in the UK and in most regional events but many riders prefer to use bitless bridles, arguing that the bit can cause severe nerve pain, tongue lacerations, pinching and breathing problems for horses.

The campaign was started by the Norfolk Horse Training and Equitation Club (NHTEC).  Mr Lamb, who is a Norfolk North MP said his request is “for people to have the choice. I cannot really see the argument against.”

The traditional bit has been used by riders since ancient times however this issue came into the public eye in March when an internet debate about the safety of bitless bridles was sparked because Prince Edward’s ten-year-old daughter Lady Louise Windsor was pictured riding a pony using one.  Campaigners argued that if a young Royal could ride a horse without a bit, it must be safe.  The Secretary of NHTEC stated that:

‘Metal bits can be very painful for many horses, particularly those put under pressure to perform in competitive events. It’s high time riders were allowed to choose more horse-friendly bridles.’

‘I wouldn’t mind in the slightest if I competed against a bitless competitor. It’s a personal choice.’

Hello and welcome to my blog!  Please watch this space for new posts on topics around wellbeing, connection and healing with people and horses 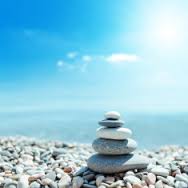